I had never done a duathlon, so when I saw an ad for the Colossal Du – Is it Tougher than You?, I decided to register. The course was a 5K run/12 mile bike/2 mile run in and around the very hilly Colossal Cave Mountain Park. Since it was my first race post-marathon and the start of a new season, I didn’t feel too much pressure. It would also be my first multi-sport race since October and my first race on Futomaki*.

Race temperatures were predicted to be in the 30s, and I decided to wear running tights, a short-sleeved short, arm warmers, a jacket, a headband that covered my ears, and cycling gloves. I knew that the weather wouldn’t cause a problem on the run, but I was worried about drafts on the cycling portion. I packed my triathlon bike shoes and stretchy Zoot running shoes for quick transitions.

Race start time was 7:30 and I set my alarm for 6. When the alarm went off, it was cold enough that I thought about going back to bed for a minute. I had a Luna bar, made a hot tea, loaded everything into the car, and set out. When I left home, the car thermometer read 41, then quickly dropped into the 30s. It read 27(!) around the farmer’s market, but came back to the mid-30s at the race site.

The event was small (there were 45 duathletes plus a handful of 5K runners and a couple relay teams), and I was able to park about 10 feet from the transition area. I found a space and set up without a problem. Everyone was bundled up, except for one man who was wearing a tank top and running shorts (maybe he was one of the competitors from Flagstaff?). There were a couple gas heaters set up as well as a fire pit and people huddled around them. I had a Chocolate Cherry Clif Shot about 20 minutes before the start.

The officials finally called the runners to the starting line. I stood about 5 feet behind the line and no one stood in front of me. There were some last minute instructions, and then we all moved up. I was right at the front, which never happens. I looked back to see if anyone was trying to wiggle up closer, but no one was. And we were off!

Being at the front, I felt jumpy and ran my first hundred or so meters way too fast. I settled in to what felt like a good effort – I still didn’t know if I was totally recovered from my marathon and the course was hilly, so I wasn’t trying to keep a particular pace. It felt like everyone was passing me me, but I didn’t turn around to confirm my suspicions. The incline started to pick up and I certainly felt it. I took a quick drink at the mile 1 water stop (today was not a day to dump the rest of the water on my head!). After about another quarter mile, the climb got really steep.

As we rounded the top of the hill, there was an amazing view of the desert below. Heading downhill was a relief, and at this point, I could see that there were in fact some runners behind me. I played back and forth with another woman for the last mile. She surged as we approached the end of the run and I decided to let her go at this stage in the race. I was relieved when she veered off to the 5K finisher’s chute.

Transition 1 (data is included in the bike split)

I sat by my bike and tore off my running shoes and grabbed my bike shoes. I had a moment of confusion where I wasn’t sure which shoes belonged on which foot. The tri shoes velcro the opposite way than bike shoes because it makes flying mounts easier and it had been a while since I had used them. I had drawn arrows on the flaps to help in just such a situation (I had also written a brightly colored reminder to remove my helmet on the shoes after forgetting once in a race).

The course consisted of two loops. Colossal Cave Road was covered with cracks, potholes, and gravel. Road crews had come by the day before to fill up some of them, but even the patches were gravelly and I could hear the stones bouncing against my spokes. A couple of men in Tri Sports cycling jerseys passed me. I’m still not crazy about riding downhill, so I used my brakes a bit. Pistol Hill Road is in great condition, but the cross winds made it really hard to stay in the bike lane. After the up and down, it was on to Old Spanish Trail and I really felt the next climb. It was granny gear all the way.

I rode back into the park, and as I approached the start of the next loop, the race organizers wanted us to slow to 10 MPH because of the gravel. I put the brakes on, but didn’t get quite that slow. There was an aid station, but I didn’t stop. A woman passed me on Colossal Cave Road. I gained on her a little bit on the Pistol Hill and and Old Spanish Trail climbs. I pretended that she had a magnet on her butt and was pulling me toward her, but I couldn’t quite catch her.

Between the condition of the road, the climbing, and the winds, this race was really suited for a road bike, but a tri bike is all I have at this time. I only noticed one other person riding one. 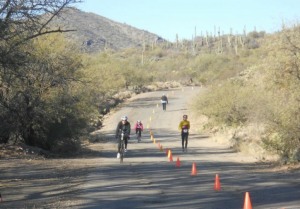 I had no problem remembering to take my helmet off or figuring out which shoe went on which foot. I thought about taking my jacket off, but decided to keep it on. I left transition ahead of the woman I couldn’t pass on the bike.

Oh, post-bike wobble legs, how I’ve missed thee! It took about half a mile before I felt I was running normally. I was starting to heat up, so I tossed my jacket at one of the volunteer stations (someone was kind enough to bring it back to the finish line for me so I didn’t have to go back and retrieve it). The 2-mile course was the same as the 5K course, except we turned around sooner were spared the big hill. I felt like I was running as fast as I was able, even though I didn’t have that put me out of my misery feeling that I usually have at the end of a race. I think my legs were holding me back more than my heart and lungs. Still, I was very happy to see the finish line.

I ended up placing 1st in my age group… out of 2. It was such a small race that almost everyone took home an award. I thought my times were slow, but it was a tough course and I still might not be back to 100%. I have a flat 10K next weekend that should give me a better idea of where I’m at.

*I wanted to give my bike a name and didn’t have any good ideas. I was looking at a poster in a sushi restaurant and noticed the Futomaki (Big Roll). I liked the sound of it, and my new bike (700) had bigger wheels than my old one (650).

2 thoughts on “Colossal Du (Back in the saddle again)”