I had been planning on doing this race for a few months, but hadn’t sent in my registration. It’s pretty low-key, so I figured I’d just show up on race day and go. The race started at 9 and I set my alarm for 7, figuring I’d give myself time to eat my normal breakfast instead of having a bar. When the alarm went off, I heard the steady thumping of raindrops. I turned over and thought about skipping the race. I haven’t invested any money, I’ll run in the afternoon, it would be so nice to spend a lazy morning drinking hot tea and listening to the rain. Besides, this race was a school fundraiser and wasn’t being put on by “serious runners.” For all I knew, they would cancel. I finally got myself out of bed to check the website, but there weren’t any updates. Around 7:40, I finally decided to go; if it was cancelled, I’d run on my own. Even though it’s tempting to stay inside when the weather is bad, some of my best runs have been in the rain. I ate a Luna bar and headed out.

When I arrived at the school, the rain had let up. I registered, paid my $27, got my number, and relaxed in my car for a bit. I had a chocolate cherry Clif Shot about 20 minutes before the start. It was a fairly small group, and the men far outnumbered the women. Last year the fastest woman had finished in 45:27. If I were at full capacity, I could run around that time, but I’m still running a bit slow. Still, in most races, I wouldn’t have even a glimmer of hope that I could win. Since the crowd was so small, I started right behind the line. Some of the men and a woman in a blue jacket took off. The rain had stopped, and it was 60 degrees and 90% humidity. This is the desert, and anything above 20% feels stifling. The clouds lingered low around the mountains. I had worn capris and quickly wished that I had chosen shorts. You’re not supposed to feel hot during a run in January, even in Tucson.

The course had several rolling hills with some decent climbs. There were five water stations. After about a mile, I was passed by a woman who had a dog leash attached to her waist. She asked what my time had been at the mile mark and I told her “About 7:53.” She said that they were going to fast and the dog wasn’t being a good pacer. I ended up passing her around the second mile. As far as I knew, only the blue jacket woman was in front of me. I could see her about 200 meters up ahead. My next two mile splits were faster than the first, but at the time I didn’t know if it was because I was getting stronger or if it was an easier part of the course. The version of U2’s song Magnificent that was a part of the current RPM release was running through my head.

After the fourth mile, there was a stretch of dirt road. Parts of the it were firm and only slightly wet, but there were also some slick muddy patches. I kept thinking of the Seinfeld episode where Kramer overhears some men talking about a horse race that was going to be run in the rain.

I am ignorant of my bloodlines, but I wasn’t loving the slop and it did slow me down a bit. I ended up losing blue jacket around here. It was back to the pavement with about a mile to go. There wasn’t anyone to close to me either in front or behind. I wanted to finish strong, but I didn’t push as hard as I would have if this had been an A race, there was a PR on the line, or there was someone to run down at the finish. As I crossed, the announcer confirmed that I was the second-place woman.

I ran a couple of cool down miles and then headed back the the gym. After I changed into some dry clothes, I took a banana and half a wheat bagel and ate them along with my 2nd Luna Bar of  the day. The woman with the dog said that she recognized my name from other races and I recognized hers. She was the third female finisher. I was awarded a $40 gift certificate to the Running Shop for second, so in a sense, I got paid to race that day. I was a minute faster than at the 10K two weeks ago, on a tougher course in worse weather. I’m still not back to where I was, but progress is encouraging. I also ended up with a new Facebook friend. Getting out the door was definitely worth it that morning. 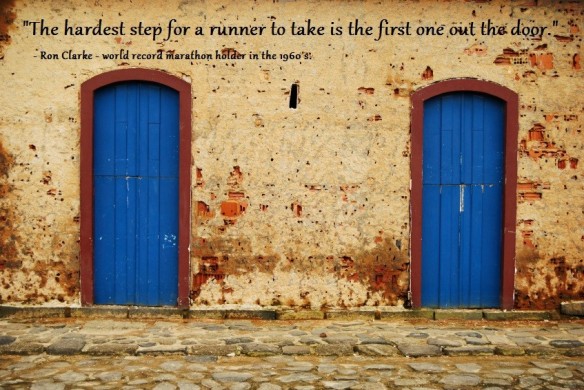