After a full year of racing, I had decided that November would be a recovery month of sorts before ramping up training for my March marathon. I was still teaching classes and getting the odd swim and bike ride in, but I had knocked my weekly mileage down to 20 and wasn’t doing speedwork. Still, I couldn’t go cold turkey when it came to races, especially on Thanksgiving 😉 When I knew I was going to spend the holiday in New York, I scoured the internet for Turkey Trots and found one in nearby Rockland County.

The race was about an hour from where we were staying and I needed to pick up my packet on race day, so the alarm went off before six. A big thanks to Ted for waking up early with me and handling the driving. The roads were quiet and it was nice watching the sky shift from dark to light. I got a kick out of some of the local businesses we passed: there was a dentist named Zitofsky (would have been a great name for a dermatologist) and the law offices of Hood, Hood, and Hood.

I think the camera was kind of sleepy too…

It was 25 degrees outside, which is cold but manageable for this warm weather girl. But add some wind and ugh… I got my packet and went immediately back to the car. When it was time to leave my warm sanctuary I was grateful for each and every one of the layers I had put on that morning. The announcer told us that this was the coldest it had ever been for this race. Even so, there is always that one guy wearing a tank top and shorts…

I had looked at previous year’s results and knew that I was fully capable of bringing home an age group award. On the other hand, I had strained my calf a week and a half before, and had only done one easy walk/run since. The muscle felt good, but I did not want to push too hard and mess up my upcoming marathon training. I also wasn’t sure how much Easy November had affected my fitness, so my main goal was simply to enjoy running outside in a new place.

At least the New Yawkahs were bundled up too.

I started toward the front, but it still took a little while for me to cross the start line. There were icy patches on the road and I slowed down to navigate the large ones and hurdled the smaller ones. I knew that there were hills in the early miles, and did my best to keep an even effort, even though it meant I got passed by more than a few folks on the way up. My mental DJ blasted The Black Eyes Peas’ Pump It. Even though the wind sliced through my clothing, I ended up taking my hat off after a couple of miles. Around mile three, we were treated to a view of the sparkling lake. Now that’s something that I don’t normally get to see. Even though it was cold, the sky was a beautiful blue. It was a nice reprieve from the dismal and gray weather we had been seeing, but simply thinking about gray skies brought the song California Dreaming to mind.

My arm warmers were damp with sweat even as the frosty air bit my cheeks. I focused on the sensations I felt and reveled in being alive, which brought this blast from the past into my head. I knew that my mile splits were probably short of what I would need to place, but I was glad to be running pain free. The final straightway was right smack into the wind. I felt like a football player pushing an invisible tackling dummy. Still, I was feeling good enough at the end that I picked up the pace a bit and passed a couple of people.

I grabbed a banana and bagel and found Ted. We decided to not wait around for the awards. I ended up placing fourth in my age group and missed third by just over a minute. My pace for this race (7:35) was slightly slower than the half marathon I had run a few weeks ago (7:27). I was a little disappointed, but in the spirit of the day, I mostly thankful to be healthy and to spend the rest of the day in warmer places. 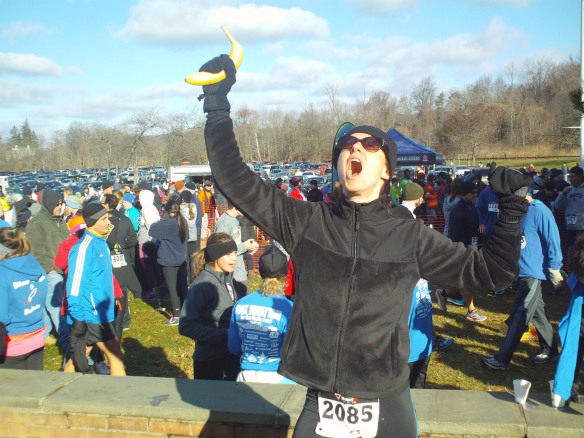