Building my mileage on my weekend long runs has been a challenge this go-round. I’ve been running alone, and my body has rebelled a couple of miles before the end of each one. I hadn’t done a race since December, and I missed the excitement and camaraderie of competitive events. The Sedona course is known for its challenging profile (1000+ feet of elevation gain) as much as its beauty, and I thought it would be a nice addition to my Boston Marathon buildup. My boyfriend Ross would be racing as well, and he makes every run more enjoyable.

The heavy rain the day before had damaged enough of the trail section of the marathon course that the organizers called it off, and the runners were given the option to run the half. The shorter courses were completely paved and would be held as planned.

When we left Flagstaff that morning, we were relieved to see that the rain had stopped. We fueled up the car, stopped at McDonald’s to fuel up Ross, and hit the road. We grooved to a cheerful, catchy tune called “Shantantitty Town” on the way down. We’d heard it several times before, but only just realized that it was about a whorehouse where one of the visitors finds himself “all freckled and speckled.”

We parked downtown and waited for one of the race shuttles to take us to the starting line. We waited and waited… and arrived at the race site with about fifteen minutes to spare. We managed to take care of our pre-race business, check our bags, and take a few starting line pictures before we were sent off. The lingering clouds against the backdrop of the red rocks were spectacular. 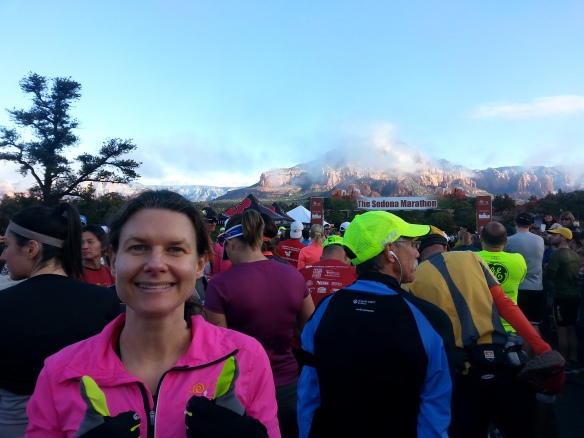 While it was cool at the start, the sun shone warm, and we shed our warm layers before mile two. Luckily, Ross’s shorts had large pockets, and he kindly played pack mule for both of us. I was afraid that we’d get hot, but we stayed pretty comfortable throughout the race.

A few miles in, we were passed by a wiry guy in a Flagstaff singlet. The way he was running, I was surprised that he’d ever been behind us. Then we were passed by more and more people. I mean, it happens, but this seemed like an extreme number. Not that much later, we saw wiry guy running back the other way and realized that he was doing the 10K (they started after us, and I think he won). I decided to pretend that every person who passed us up until the 10K turnaround was doing the shorter race.

The course was almost never flat, and we ran conservatively because of it. When we saw event photographers, we’d hold hands and make silly faces. The aid stations were well-stocked and just frequent enough. There were a decent amount of spectators for a smallish race. We waved at a family and their inert dog, and saw a guy in a green full-body suit. A couple of girls in sparkle skirts and shirts with It’s My/Her 21st Birthday! on the back passed us. They weren’t doing the 10K. The course was an out-and-back, and we started to see the male leaders. Then the female leaders. Ross kept count for about ten of them.

At the turnaround, “Total  Eclipse of the Heart” knocked Shantantitty Town out of my head for about a mile (Turn around…). We still felt pretty good physically and were now facing a stunning rock formation. It was one of those views that would have stopped me in my tracks if 1) I hadn’t been running a race and 2) I wasn’t going to be running toward it for over two miles. I wished that I hadn’t worn my trail shoes. The Half course was completely paved, and I longed for some extra cushioning on the downhills. The inert dog must have summoned the strength to move a few feet only to collapse again. 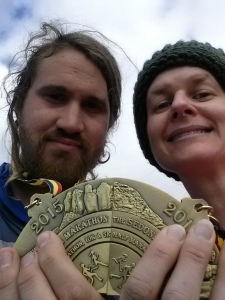 The eleventh mile was steep. I felt the miles, but also felt like I could push the rest of the race. Ross wasn’t sure, but he tried to hang. This same woman kept passing me and taking walk breaks, during which I overtook her. I just wanted one of us to take the lead and be done with it! I pulled away from Ross in the last mile and kept testing my legs. I felt that old, familiar burn in my lungs and embraced it. I was happy that I was feeling strong, because the final miles of my recent long training runs had devolved into shuffles. I finally left the walk-run lady behind, and turned toward the finish line. There were a couple women ahead of me, and I tried to catch them. I passed one, but couldn’t overtake the other. I finished in 2:01:47, which I was happy with considering the course and my current fitness level. Ross crossed the line eighteen seconds later. It was the only time I’d ever beaten him in a race, and it will probably never happen again.

Once we stopped moving, our sweaty bodies quickly grew chilly again. We grabbed some post-race snacks, chatted with a few friends, and decided to take shuttle back. We waited and waited… Shuttle frequency is my only real complaint about this race. Later we found out that Ross was somehow listed as a 99-year-old, and ended up winning his age group. In his words, “It was the only way I was going win an award.” They mailed it.

Between the views, weather, and being able to share the experience with my sweetie, this race goes down as one of my favorite running memories, and I plan on doing it again.

3 thoughts on “Sedona Half Marathon”