From getting pumped to lace up to squeezing out that final rep, music improves your workouts in several ways. Tempo is less important than whether you personally find the song to be motivational, so I’ll be sharing a wide variety of tunes that inspire me to move.

I teach a couple of indoor cycling classes per week, but it’s been a while since I’ve been on a real bike. Ross and I battled the hills, strong winds, and limited oxygen that defines cycling in Flagstaff. When I finally felt like I was finding my groove, Ross started yelling “Spin! Spin! You can go faster than that!” And you know what? I could.

As he continued to tell me to spin, this song popped into my head. It’s about listening to a record, but since a bike tire is also a black circle, I tapped into the relentless energy of the music and Eddie Vedder’s insistence that I

After 1100 feet of elevation game, it was time to spin down the hill. Weeee! 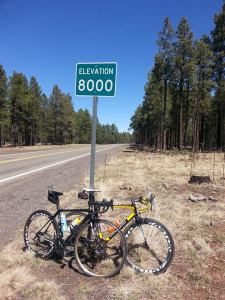 I’m always interested to hear what you think and what songs motivate you personally.